This is a Revell 85-5093 1:72 Scale Star Wars™ Millennium Falcon™. The Millennium Falcon™ was made by the Corellian Engineering Corporation. It was constructed as a spec YT-1300 Light Freighter and modified by smugglers, becoming the Stellar Envoy. Then, after a few more owners and a crash, Han Solo won the Millennium Falcon™ from Lando Calrissian in a card game. For Solo and his Wookiee copilot, Chewbacca, it was the perfect ship for their smuggling exploits through the galaxy. However, it wasn't long before they got embroiled in the rebellion. Kit features display stand, landing gear up or down, and scale figures.Condition: Factory NewOperational Status: FunctionalThis item is brand new from the factory.Original Box: YesManufacturer: RevellModel Number: 85-5093MSRP: $349.95Category 1: Other ToysCategory 2: Model KitsAvailability: Ships in 1 Business Day!The Trainz SKU for this item is P12157673. Track: 12157673 – No Location Assigned – 001 – TrainzAuctionGroup00UNK – TDIDUNK 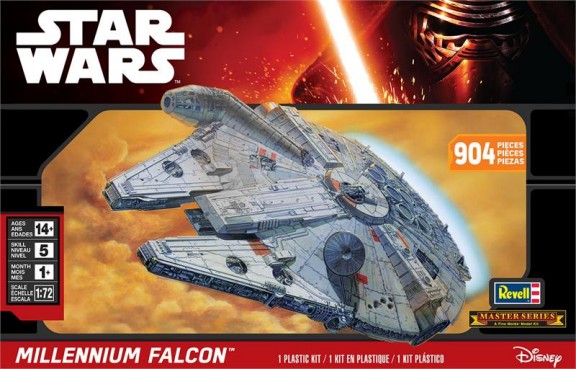