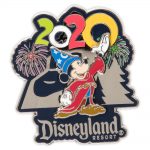 Since 1999, one of the most fun thing for Disney fans to collect has been trading pins. Some 21 years later, the fun is still going on. Disney is releasing more pins than ever before, especially since this is Disneyland's 65th anniversary. The pins we're going to highlight for this edition of Disney Sundays are the Disney Parks 2020 pins that feature Disney characters at Disney Park landmarks. These pins are part of a larger 2020 set, but we're going to focus on just the Disney Parks Dated 2020 pins, which are park exclusive pins.