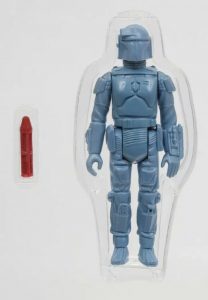 One of the rarest Star Wars toys, a Boba Fett action figure prototype with working missile-launching jetpack, has been listed on eBay for $225,000. It was intended to be released in 1979 by Kenner, but was deemed a choking hazard. As a result, a version without the missile-launcher was released. Only 80 of the original 100 prototypes remain. The last one sold for a mind-blowing $185,850.